Yasuyama Akira the Elder (安山朗1世, born September 3, 2133) was a forces mage and upstanding citizen of the old Eastern Bloc while it was still based on Earth. An open-minded man, he joined the Tech Infantry despite his Eastern Bloc citizenship to fight in the Drakat War, eventually rising to the rank of captain. He married Holly Von Shrakenberg, the daughter of a German Earth Fleet admiral, in 2165, and their son Yasuyama Akihiko was born the following year. While touring the outer systems in 2194 with his wife, his daughter-in-law Kim Myeong-eun, and infant grandson Satoshi, the four were tragically killed by the Bugs.

His Actor Avatar is Ken Watanabe. 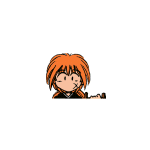